As you might already know, we had a very busy summer as we spent lots of time working on our Bus „Eve“. So we had a very lazy September and October – but now we are back! What happened? We ordered several new parts and replaced old screws. Additionally we started to varnish the boards of the interior panels. Luckily the previous owner from the Netherlands already made these stencils and we received them with the bus back in November 2017. We decided to cover them with varnish so that they are more resistant. But that’s it for now, the upholstery with the fabrics might happen also during this winter, we will see..

Here is a comparison showing some of the 50+ year old aeropapyrus interior panels from California and the new cardboards. 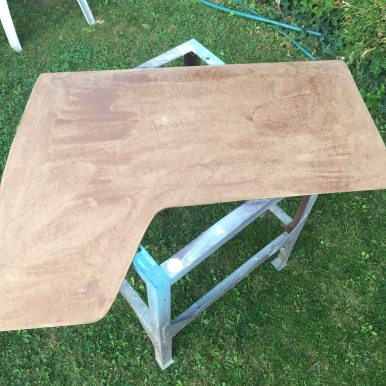 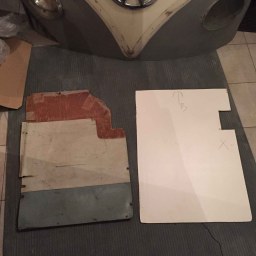 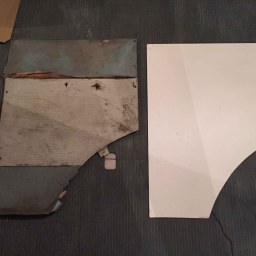 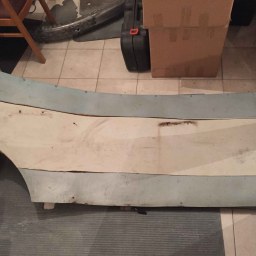 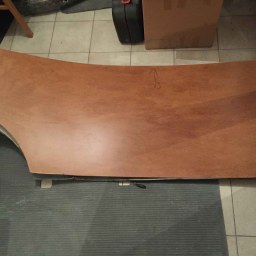 Furthermore we wanted to know more about the condition of the front door’s window frames. In general they made a good impact, but the lower parts of the frames that were hidden inside the door were rusty on several spots. So we disassembled the windows and sanded the frames. Good News: everything can be used again – beside of the seals. 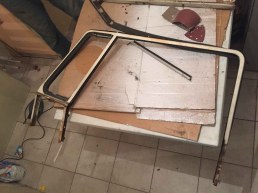 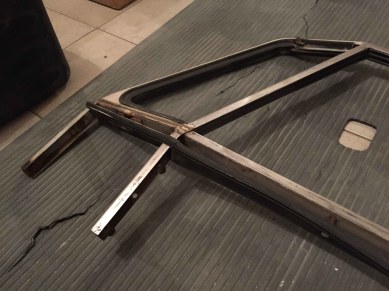 Afterwards we decided to take a look at both of the bumpers. We started to carefully sand down the first layers of the front bumper. At first just on the outside, the inside will happen soon too but might be a little more challenging. The front bumper turned out pretty good – as you can see in these pictures we soon reached shiny, bare old metal! 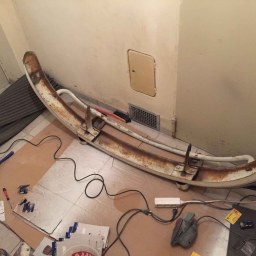 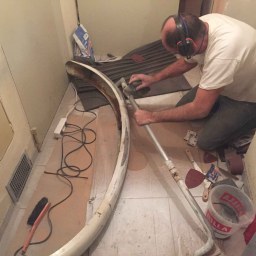 But as this was very tedious work, we decided to work faster whilst taking care of the rear bumper. Both bumpers do show several dents, the rear bumper even has been cut and bent to the inside. We do assume that the bus once had a beetle engine and that’s why they needed space for the exhaust pipes in the middle of the rear bumper. But thats just a speculation, as Mark already bought the Bus like that in the early 90ies we do not know any better.

Luckily we were able to save the original metal of the rear bumper. The bent parts of the inside could be moved back to their original position and were welded back in place. In summer we decided to cover those areas with white primer. You can clearly see it in the pictures as this white color separates from the original paint.

So the steps were already clear, starting by removing the deluxe trim. At first by detaching the rubber inlay, followed by its mount at the corners of the bumper. Then we started to sand everything with an angle grinder and a wire brush attachment. Afterwards we disassembled all the horns and bars, bought new screws and put everything back together. Of course the bumpers are not finished yet – they still need work on the inside, need to be grinded better and so on and so on… It might take a while until they will be painted again. Here are some photos: 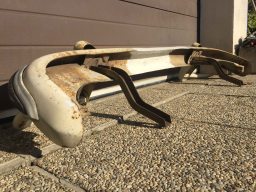 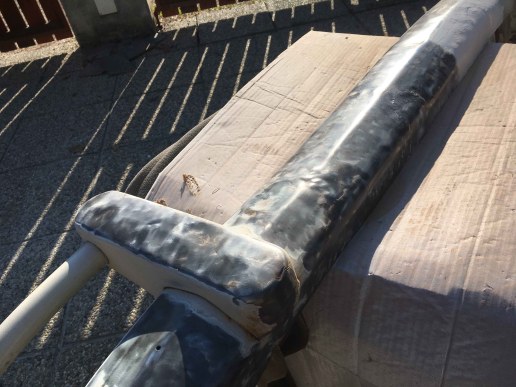 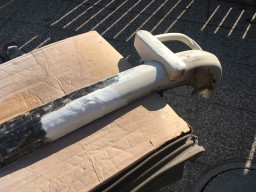 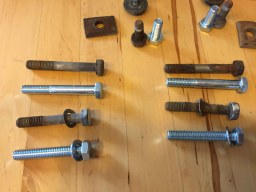 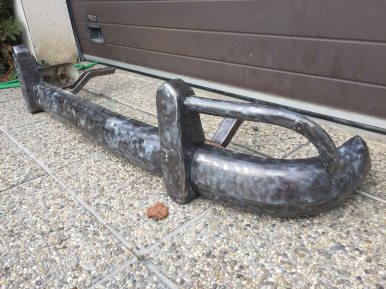 As if we did not already have enough work with this bus project, we nearly bought a second, even more challenging Volkswagen bus project. This barn find – or shall i say field find – was sitting in a garden less than 5 minutes away from us! I don’t want to know how often i had already passed by this property and did not notice it. Such a great find – and that in the middle of Vienna, right next to the subway! Sadly we could not fix the deal but the Volkswagen Splitscreen single cab is in good hands now! I might write more about this find in a separate blog soon.

The following thing is not that important for the progress of the restoration, but i want to show it to you:

May i present: The AustroSplit „business“ cards! During summer it often happened that people passed by and talked to us as we were working on Eve in our garden. So i often told them about our blog – and now i decided to print those cards so these people can inform themselves by visiting our website. That’s my way of continuing Marks idea of letting people be part of Eve’s adventures (as you might know, he had and own facebook site for this particular VW bus).

And in the end i want to show you our „bus room“ as my dad and i do call it, very much to the delight of my mother. As there is only limited space in the garage and as it is already very cold outside, we took all parts of the bus that we dismantled during the last year and moved them to the cellar. Its incredible how much stuff it has become in the meantime! 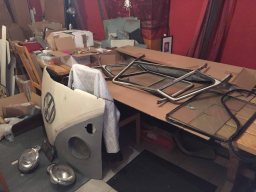