Pretty exact a year passed by now.. Back in March 2017 we were dreaming about owning a VW Splitscreen Bus but didn’t think that it would happen very soon..
And then i found something in our own garden!

The prehistory of our hidden treasure

My fathers interest in cars – and of course also mine – has been given to us by birth. My grandfather had a car graveyard on the place where our house is located today. He collected scrapped cars and sold the parts there from about 1960 to 1990 – but sadly the place had been cleaned before I was born. Afterwards the property has been used by a car dealer for more then 10 years.

Allthough the place has been cleaned from oil spots, broken glas and little metal parts that were under the earth, we sometimes still can find little car parts whilst gardening.

In 1994 my parents received the property and started to build the house. At this time, my father discovered the poor remains of an old panel van for the first time. It has been standing at the farthest end of the garden right next to the fents and covered by plants.

Back then his interest in old vw buses didn’t exist and i was about 2 years old. Furthermore at this time the buses were not that valuable and there would not have been many people who would have saved it. At this time the front part of the vehicle has already been missing – so the roof already declined as it was not that solid anymore. Thats why my father decided to cut it down and dispose the humbly rests.

As far as he could remember in 2017, it was a panel in very bad condition – he couldn’t tell anything about the brand anymore. Sadly he didn’t take any photos before cutting it down. He also still knew, that it had been one of the first cars on the junkyard. So it definetely spent the last 40 to 50 years there. At some point it has been used as a shed for a wolf. Yes – there was a real wolf that guarded the junkyard back then!
That was all the information we had in 2017 – so my interest was rising… 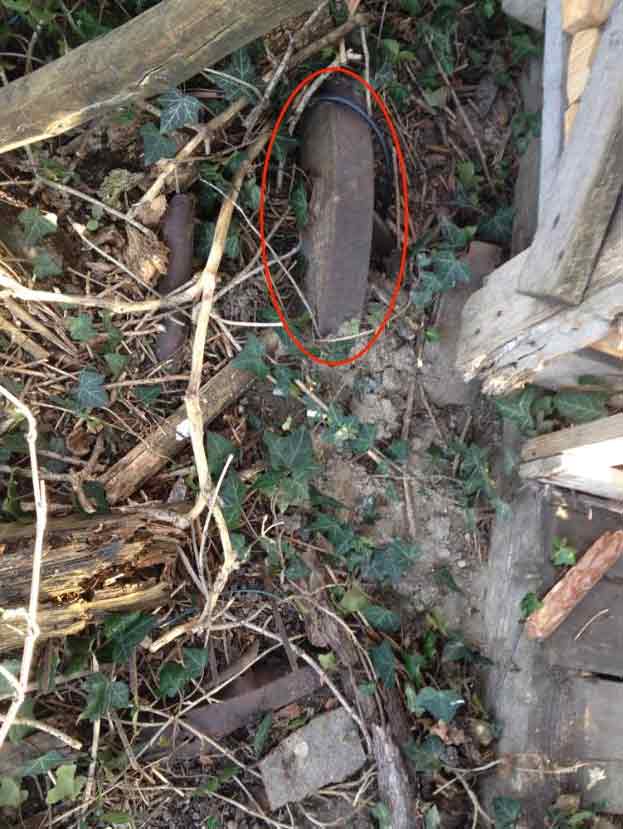 If you enter our property you would not believe that our garden once has been a scrapyard for cars at the first sight. But right in the rearest corner where we store our firewood today, i noticed that metal parts several years ago (as seen in the photo above). Of course I knew how a VW Bus chassis and especially barndoor frame looks – as I followed several restoration builds in different forums. But I was not sure – i thought this would be to perfect. I mean what are the chances? So i decided to start digging…

The sandpit for the VW enthusiast

As I was very curious, I grabbed my shovel, tiny gardening tools and hand brushs and started to unearth this misterious chassis. After removing many ivy and other plants i commenced to scoop carefully. Like a real archaeologist I used wood sticks to mark the outer borders of my sandpit and I also covered the place over night.

If you are aksing yourself, why the chassis is lying so deep in the ground I can only tell you the following.. About two meters away the neighbours ground is starting – it’s a field. At least twice a year the tractor is ploughing the field and swirls up a lot of dust. And in the last 5 decades the vehicle got covered with soil – at least that’s how i explain it to myself. 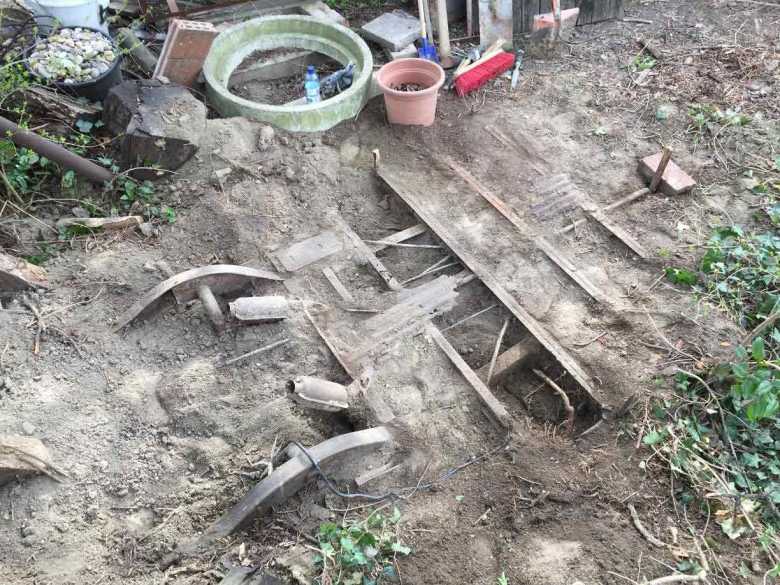 After removing the dust and many roots that were growing through the chassis my first suspicion got confirmed. It was the chassis of a Volkswagen Type 2 Transporter – a real Splitscreen Bus! I showed it to my father and he immediately wanted to travel back in time and kick his own ass.

From my fathers memory I already knew that it was a panel. With the help of some barndoor experts I now can say, that this is the chassis of a transporter – built between September 1952 and May 1954. The chassis-number (VIN) does not exist anymore – most likely it has been disposed with the remains of the body back in 1994. I asked several people and also the official experts at Volkswagen – they all said that there is no way anymore to tell anything about the car – as there exists no number on the remains of my frame. 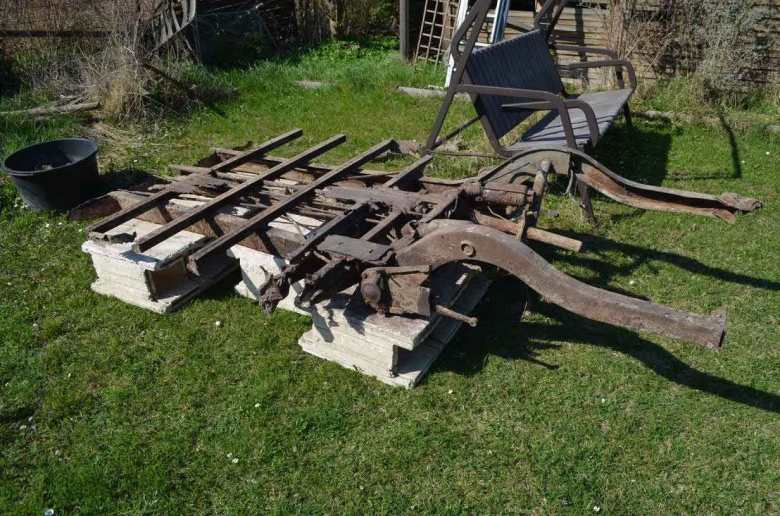 After a couple of days the chassis finally was free and we could lift it ouside the dirt. I couldn’t tell much – but somehow I was impressed as the outer parts of the crossbars still didn’t have any problem with my 80 kilogramms. Of course other parts such as remains of the floor metal sheets crumbled as soon as I touched them. Another nice surprise was, that one of the lever arm shocks is still moving – Video.

Click here to take a look at many different pictures of the VW chassis – from the very first photos still in the dirt, to the last pics lifted out and all cleaned from the dirt.

Soon after „Wrecks & Finds“ posted pictures of my find, I got contacted by people from Austria and abroad. People wanted to hang the chassis on the wall of their garages, use it as a frame for a glas table and trade it for a beer crate. But also VW-Fans from France and UK such as Mark S. who restored the famous Kohlruss-Bus showed interest. But so far, no one managed to pick it up or bother about the shipping.

So since March 2017 it is sitting in our garden, covered and still waiting for someone to buy it. If you are interested, just contact me.

Update: In the meantime the chassis found a good new home. Günter picked it up with his vintage Ford Taunus Bus. Of course you can read more about it in another blog post.