This blog post will be all about our progress in the past year. Here I will sum up the most important steps of our 1967 Volkswagen Deluxe Bus restoration so far.

Thats how „Eve“ the bus looked like, before we started working on it: 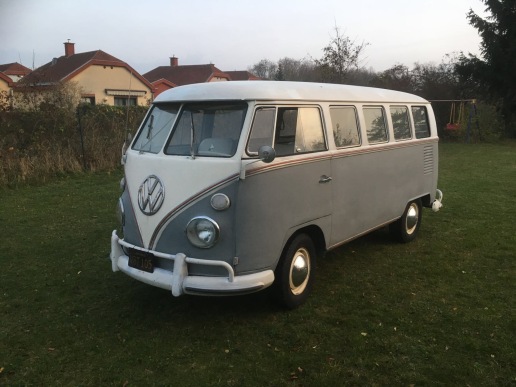 Quite often people are asking me, why we started to restore the bus, as it was looking quite good in the old pictures and as it still was in driving condition. To be honest we also would have loved to keep the old character of this original paint survivor. But as we imported the car it has not been registered in Austria before and so we had to do this work, because otherwise it would not have been possible to receive the licence for driving on the streets here. Back in USA it was possible to drive with a little bit rust here and there and a tiny hole in the drivers floor and some other problems – but in Austria the rules are stricter. And in the following pictures you can see some of those problem areas that were hidden underneath this strange grey overpaint:

Already when we were buying the bus we saw that it had a front crash in its earlier life. You can clearly see it in the first pic above showing some cracks next to the headlight. The other pictures do also show some rust spots, holes and other non-optimal fixes.

So in spring 2018 we took the VW T1 Bus out of its garage in Vienna and started to screw. As we knew that there still was original seablue paint underneath the grey overpaint, we tried sand the surface down to original paint. It worked out pretty well but soon we realized that if we want the bus to last for a longer time now, then we will have to replace more metal parts than planned. And so we decided to do it right and paint it again afterwards. During those first works a few other problem areas showed up. For example rusty window frames. As the bus spent 50 years in California, the window seals were dry and leaky. 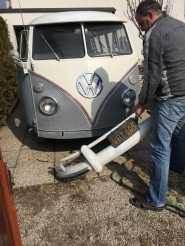 At the pop-out windows of the driver side this caused water to get inside the bus and run down the side panels until they reached the sill. So we also replaced this area during body work. But a good thing is, that we are still in contact with Mark from California who owned the bus for about 25 years and he could tell us a story about every dent on the bus! 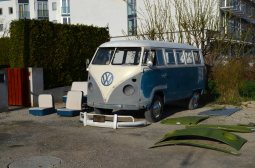 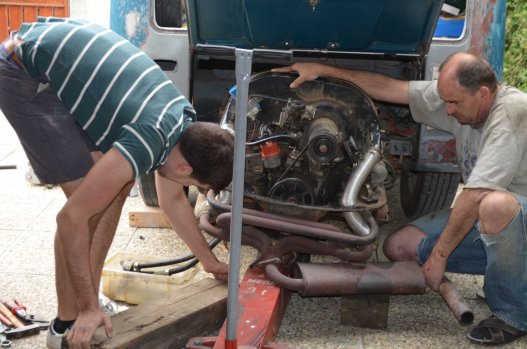 So we bought lots of funky green replacement metal sheets for our VW Splitbus and cut out the old and rusty ones. Body work started. We decided to remove the entire front of the bus as the crash that happend at least more than 25 years ago caused an unformed A-pillar and so the driver door would not close perfect at all. Above, one photo is showing the inside view of the old front that we cut out – even here you can see how they tried to fix the front crash back in the days. Now this piece of metal is our little treasure and we hung it on the wall for decoration purposes. Additionally we removed all the floors but thankfully the chassis with all the bars turned out to be in solid condition, so we sanded them down and covered them with primer before fitting in the new floors and the new nose of the bus. (see pics above). 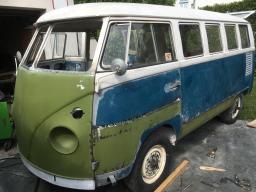 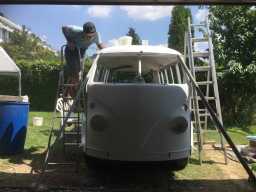 After the welding job was finished, we started with the pre paint job – so that rust will never have a chance again. I can’t remember exactly how many hot summer days were spent with working on the bus, but you can believe me when I say that it was a lot of days. Soon the total bus appeared in white pre paint color and everything was ready for the new paint job in original colors: Seablue and Cumulus White!

After this intensive days and months, we left for our well earned summer holidays. Since then look of the bus did not change very much. The interior work will be done during the next season. During the first time of autumn we have been quite lazy, but sometimes we motivated ourselves and did some smaller work. For example we took care of the bumpers, the front door window frames and prepared the interior panels. Sadly Eve’s garage is not that big, so we have to wait for better weather to start working again. But you can already imagine that it is still a long way to go.. the engine needs to be redone, the electricity as well as all of the interiour and some work at the bottom is still waiting too. Stay tuned for our future updates in 2019! Hopefully we can show as much progress as we did in 2018! 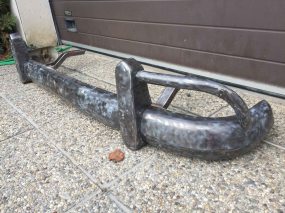 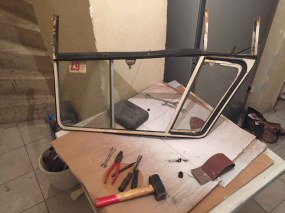 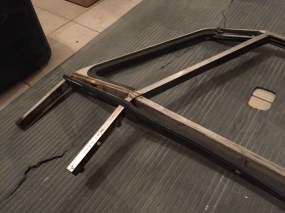 In TheSamba Forum – the most popular plattform for old aircooled Volkswagen cars – our bus Eve has its own thread where we do post more detailed photo updates of her restoration. Click here to get there.